Book Review–Secrets In Our Cities

It’s Halloween! For someone like me, who gets very few trick-or-treaters due to my neighborhood being a bit iffy for kids to walk alone at night, I tend to sort of just shrug off Halloween–I don’t do much decorating, and I just wear the same costume every year instead of buying a new one.

So on a night when everyone else is enjoying some spooks outside, I’ve been enjoying some spooks inside with a brand-new read. Secrets in Our Cities went live on Amazon today, and I was lucky enough to get an ARC copy from the publisher! As always with my ARC reviews, my opinions are entirely my own and are not influenced in any way by any of the authors involved. I received no monetary compensation for this review.

The real world and imagination collide in this international collection of paranormal urban
fantasies.

Some cities are inhabited by lycanthropes: a werewolf-turned-private-eye takes on a kidnapping
case that upsets his plans for a simple life; a vegetarian werewolf must join forces with a local
pack to save their city; and a twenty-something lycan thinks she’s the scariest monster in town
until she meets a necromancer.

Children are often the center of paranormal activity: a troop of Mountain Gals on a camping trip
runs afoul of a witch; a high school outcast pairs up with an angel to guide ghosts to their final
rests; a young fae intelligence agent is placed on his first undercover assignment at a high school;
and a little girl rattles a zombie-run pub for supernatural clientele when she accidentally begins
haunting it.

These young urbanites are more than they seem: a kindhearted girl changes her life forever when
she offers shelter to an injured hellhound; a runty dragon dwells in the sewers plotting revenge
while dreaming of reliable takeout; and an ordinary detective must team up with a young hotshot
magician to solve a mysterious disappearance.

Step across the paranormal divide with these ten short stories, and you’ll never look at your
hometown the same way again.

So what did I think of this cool-looking book?

Secrets in Our Cities: A Paranormal Urban Fantasy Anthology by Heather Hayden

The perfect read for Halloween!

This Halloween, cozy on up to the fire with a creepy paranormal anthology. I don’t usually like paranormal/urban fantasy, but I can’t get enough of this book!

No Rest for the Wearey by Katelyn Barbee
A fun read to start off the anthology. A girl visits our MC for help when two of her friends go missing, and our MC reluctantly offers his assistance to help her take down the nightmare. It’s worth noting that I thought the MC was female for a good portion of the story because both Barbee and I are female and this story is written in first-person present tense (which I’m not too fond of as a POV choice) and the “twist” about the narrator’s true identity was a bit too obvious. Having Trip and TJ both start with T kind of tripped me up, and Samantha’s age was too ambiguous; considering that I kept imagining her as an eight-year-old but then she did stuff that wouldn’t have been possible for an eight year old and at the end when Charlie offers to let her stay with him, I thought that was kind of inappropriate.

What’s in a Name by Heather Hayden
A hellhound comes to visit a single mother and her near-grown daughter and brings a terrible secret with him. This was an interesting read, as well, and being familiar with Hayden’s work and her love of fairy tale retellings, I can definitely say this is her story. Again, the age of the protagonist Lani isn’t clear (like is she in college or high school or what?) and the ending seemed a bit too convenient for me, but it’s cute nonetheless.

…Wait, that’s not the right Brock?

It’s also worth noting that the FMC has Bell’s Palsy, which I’ve never heard of, but… 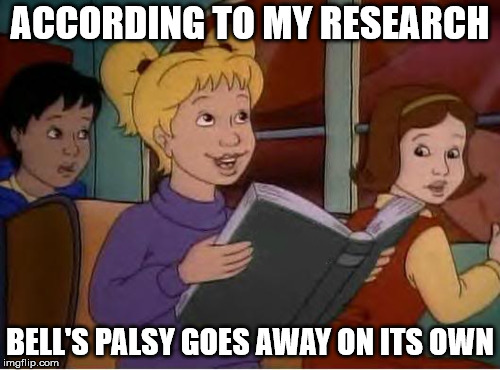 (I just had to make this reference. xD)
Even though it clears up on its own, at one point, Brock offers to cure it for her; that just felt kind of weird. I mean, maybe she only just got it and will have to wait the six months for it to go away on its own, but if so, we should have seen how she got it and how long it’s been since then.

All’s Fairy in Love and War by Matthew Dewar
The premise of this story is that humans need eight trees’ worth of oxygen during their lifetime, but where did that statistic come from? Is that some random factoid of common knowledge that I’ve never heard of? An interesting concept regarding the war between the fairies and the dwarves that is currently taking place in the midst of the human world, but there were too many characters for me to be able to keep track of.

The McWaterford Witch by Hanna Day
A girl discovers a cursed witch in a fast-food restaurant in the middle of nowhere and has the power to free her. A cute read, but it felt too short for me, and the details of the witch’s curse weren’t clear.

This Really Bites by Maddie Benedict
It starts out with a young man trying to hit on a park ranger and I thought he was about twelve or thirteen, which was kind of creepy. Then it wasn’t until later that I learned he was about the same age as her. A romance develops between the two, hindered only by the fact that he’s bitten by a werewolf.

It was okay. Felt a bit cliche at times, but I liked the twist concerning how the protagonist got bitten to begin with.

Gallery of Lost Souls by Madison Wheatley
A young mage has gone missing and the only clue is the woman who has been mentoring him.

This was an interesting concept. It would have been an easy pitfall to make a world of magic users and non-magic users be exactly like Harry Potter, but instead, here the mages and the non-mages work together on various tasks. Though from the jealousy that our protagonist felt at not being able to use magic, one has to wonder if that’s too simplistic of a scenario, if non-mages don’t occasionally riot against magic users. I felt like this one had so much wasted potential, both with this concept as well as the ending (which was a cliffhanger ending, grr.) Not all questions got wrapped up at the end and I was frustrated at this story for that.

The Ghostly Loch by M.L. Yates
A little girl keeps sneaking into a bar and no one can tell where she comes from.

I don’t get this one. I don’t understand what the plot was supposed to be or anything. We never learn who Cary is or where she comes from. The story moved way too fast and skipped over a bunch of things. I didn’t like it very much.

No One Delivers to the Sewers by Kristy Perkins
I don’t understand the point of this one, either. A dragon lives in the sewers beneath humans (I’m not clear on what decade of humanity, whether it’s current-day or medieval times, since he talks about some order of knights or something) and has a rat companion. There didn’t seem to be a plot or point to this or anything, and I wanted to know more about the dragon being exiled from his clan and how he came to live in the sewers in the first place. I did like how his rat companion mangled words occasionally; that was funny.

A Particularly Powerful Lunar Event, a Completely True Story by Melion Traverse
This was a good one to wrap up this book, especially if you happen to be a big fan of necromancers. I became a small fan of necromancers after reading Sabriel by Garth Nix, and this one has a lot of flavors of Nix, mixed with the wry humor that Traverse is known for. I’ve read several other pieces written by Traverse and this is one of her best, I think.

In summary:A worthwhile addition to the Just-Us League anthology collection and a must-read for any fan of paranormal fantasy.

Today’s question is: What is your Halloween costume and how do you usually celebrate Halloween? Leave a comment below and I’ll see you this Sunday for another review!

I've been an avid reader ever since preschool. My reading tastes include a deep love for fantasy, YA, romance, graphic novels, and stories set in Japan. Some of my favorite authors include Christopher Paolini, Garth Nix, HL Burke, Kathryn Reiss, Patricia C. Wrede, Raina Telgemeier, and JRR Tolkien, among others.
Memberships

What Do The Stars Mean?

Did you know I write novels of my own? Here's an aesthetic board for ya!